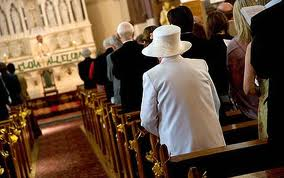 Wallace Stevens’ poem “A High-Toned Old Christian Woman,” was published in Harmonium (1923) and is viewed by many critics as a means of “poking fun at religious orthodoxy.” [1] The High-Toned Old Christian Woman is the persona addressed by the poet as narrator. She represents the accoutrements of fundamental Christianity within of the conflict between conventional religion and the spiritual connection to the earth found through imagination, which, in the minds of Stevens and philosopher William James, includes the pursuit of a sensory-minded indulgence in life.

The narrator proclaims poetry to be “the supreme fiction” and a means by which, through imagination, a person can appreciate the intrinsic value of everyday life to find joy and entertainment. The old woman, then, represents the hell, fire, and brimstone that cause all good events and pleasurable activities to be subverted by feelings of dread. [2] While the tone of the poem is both flippant and filled with an intended demoralization of fundamental religion, the ultimate message is that the imagination can provide, for willing free spirits, a reality filled with “fictive things” that “[w]ink as they will" (21-22). [3]

3. Stevens in Kermode and Richardson 47.

Bates, Milton J. Wallace Stevens: A Mythology of Self. Berkeley: U of California P, 1985. Print.

Retrieved from "https://wallace-stevens.fandom.com/wiki/High-Toned_Old_Christian_Woman,_A?oldid=4573"
Community content is available under CC-BY-SA unless otherwise noted.